I am a phd student in intelligent transportation at the University of Washington. I also serve as a research assistant in Smart Transportation Applications and Research Laboratory (STAR Lab) at the University of Washington, advised by Prof. Yinhai Wang. Before joining STAR Lab, I served as a research assistant in Tongji’s Traffic Safety Research Group, advised by Prof. Xuesong Wang from 2014 to 2018. I worked as a research intern at the Oak Ridge National Laboratory under the supervision of Prof. Hong Wang from June to December, 2019. I was an applied scientist intern at Amazon in Summer 2021. 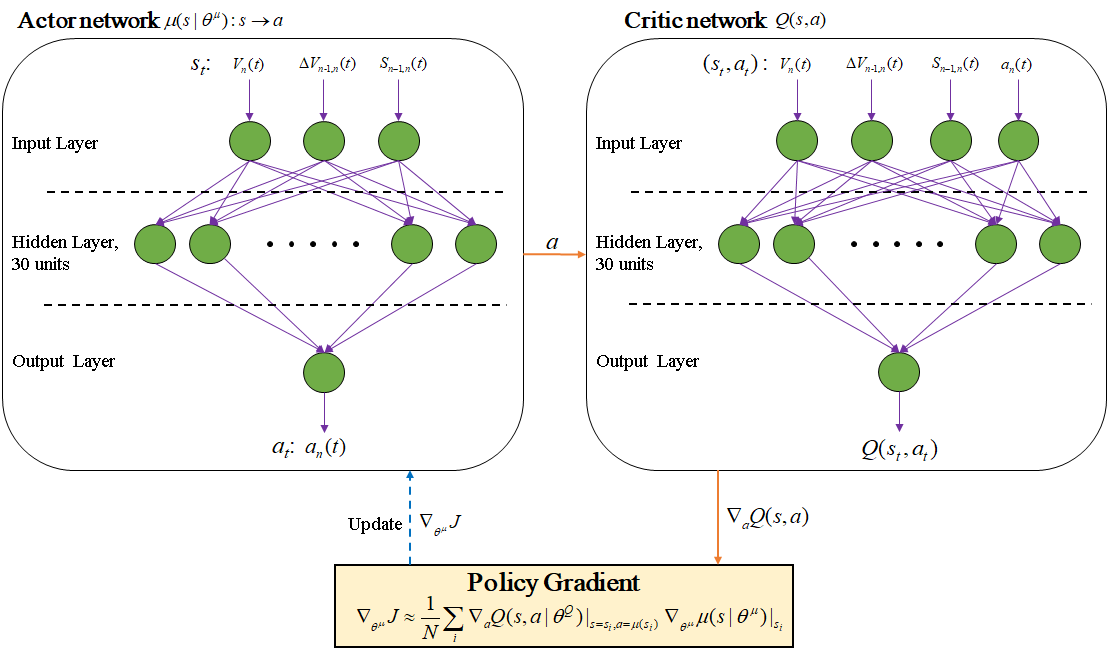 A model used for velocity control during car following was proposed based on deep reinforcement learning (RL). A total of 1,341 car-following events extracted from the public Next Generation Simulation (NGSIM) dataset were used to train the model. Results show that the model demonstrated the capability of safe, efficient, and comfortable velocity control in that it 1) has small percentages (8%) of dangerous minimum time to collision values (< 5s) than human drivers in the NGSIM data (35%); 2) can maintain efficient and safe headways in the range of 1s to 2s; and 3) can follow the lead vehicle comfortably with smooth acceleration.
Meixin Zhu, Yinhai Wang, Jingyun Hu, Xuesong Wang, Ruimin Ke
IEEE Transactions on Intelligent Transportation Systems, under review, 2019.
Project 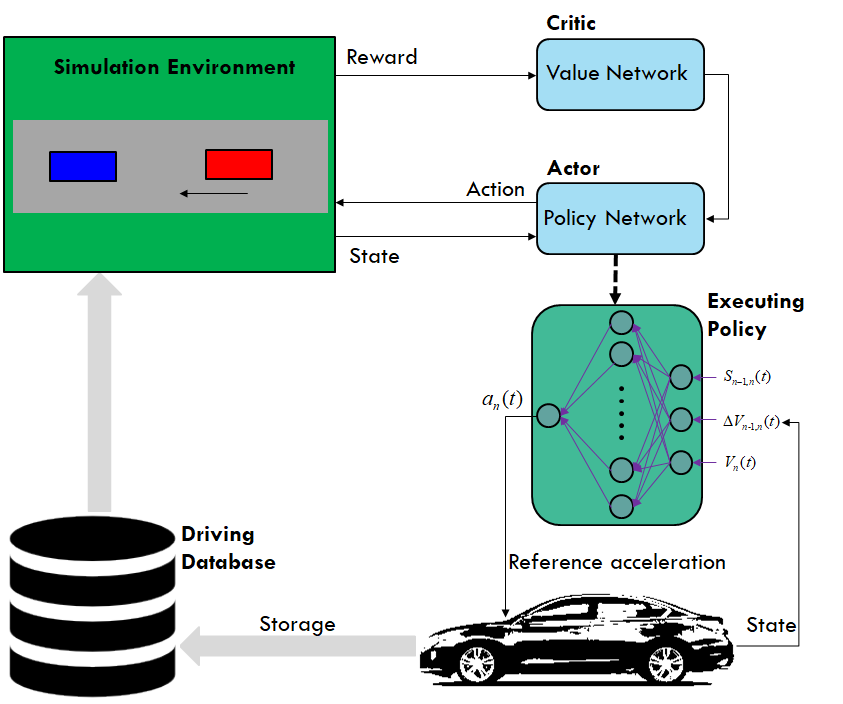 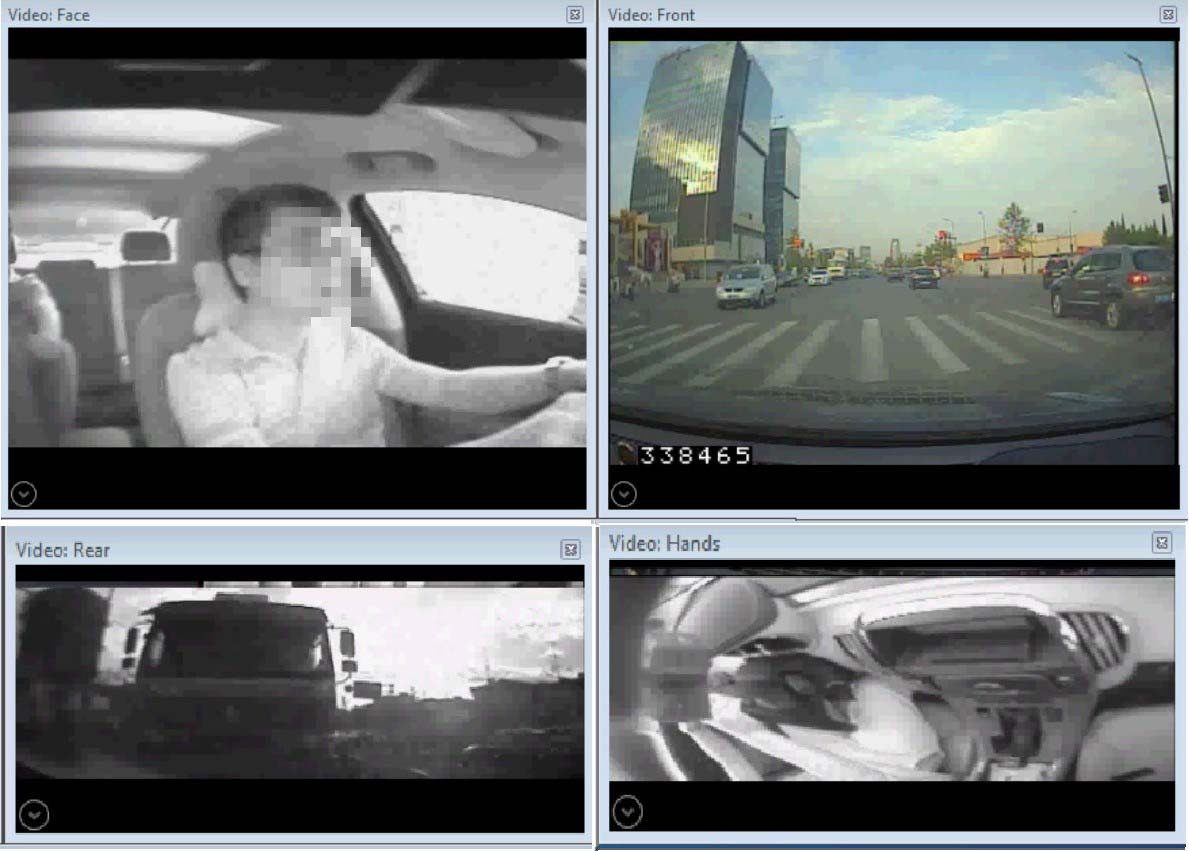 Five representative car-following models were calibrated and validated with 2,100 urban-expressway car-following periods extracted from the 161,055 km of driving data collected in the Shanghai Naturalistic Driving Study (SH-NDS). The results showed that 1) the full velocity difference model, with a validation error of 24%, performed best in modeling Chinese drivers’ behavior; 2) according to the Intelligent Driver Model (IDM), drivers from the SH-NDS adopted a desired time headway which is only a third of that adopted by drivers from the VTTI 100-Car Study in the US; 3) based on the fundamental diagrams of the IDM model, Chinese drivers adopted shorter following gaps than US drivers, which leads to a higher expressway capacity.
Meixin Zhu, Xuesong Wang, Andrew P. Tarko
Oral Presentation at the 96th TRB Annual Meeting, Transportation Research Part C, 2017.
Project Slides Source Document

A total of 111 brake-only non-collision events were presented in the Tongji University Driving Simulator and drivers’ braking behaviors were used to model their Expected Response Decelerations (ERDs). We found ERDs depended on the interaction of LV deceleration and relative speed. In response to this finding, a non-linear function with an interaction term was combined with a linear function into a piecewise function that accommodated both higher and lower LV deceleration conditions. The applicable domain of the warning onset range was then computed for a wide range of kinematic conditions. Results showed the piecewise function to be a better predictor of ERD than the linear function, and to result in fewer driver rejections of the forward collision warnings.
Xuesong Wang, Ming Chen, Meixin Zhu, Paul Tremont
IEEE Transactions on Intelligent Transportation Systems, Vol. 17, No. 9, pp. 2583-2591, 2016.
PDF Project Source Document

This study aimed to investigate the impact of Forward Collision Warning (FCW) systems on drivers’ car-following behaviors. Five data collecting vehicles are equipped with Mobileye® systems, which include an FCW function. Participants drive the instrumented vehicles for two months, with the Mobileye® system not activated for the first month, but activated for the second month. The results of this study show that (1) drivers tended to maintain a longer headway when FCW activated; and (2) the FCW resulted in a 0.13s decrease of reaction time in daytime driving, and a 0.09s decrease when a following vehicle had higher speed than the lead vehicle. Moreover, this study further confirms that the reaction time is affected by relative distance, lead vehicle acceleration, and traffic density.
Meixin Zhu, Xuesong Wang
Proceedings of the 14th World Conference on Transport Research, 2016.
PDF Project

For a most recent publication list, please refer to my CV. 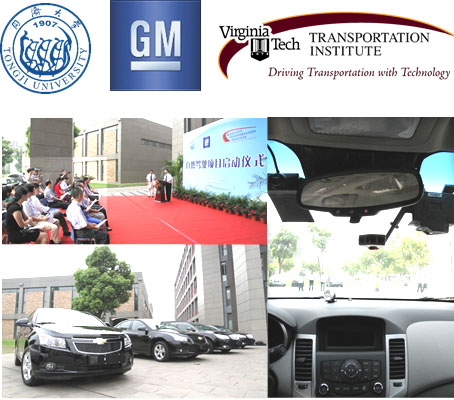 The first large-scale naturalistic driving study in China. A total of 161,055 km of real-world detailed driving data were collected from 60 Chinese drivers, providing an unprecedented opportunity for investigating driving behavior in China. 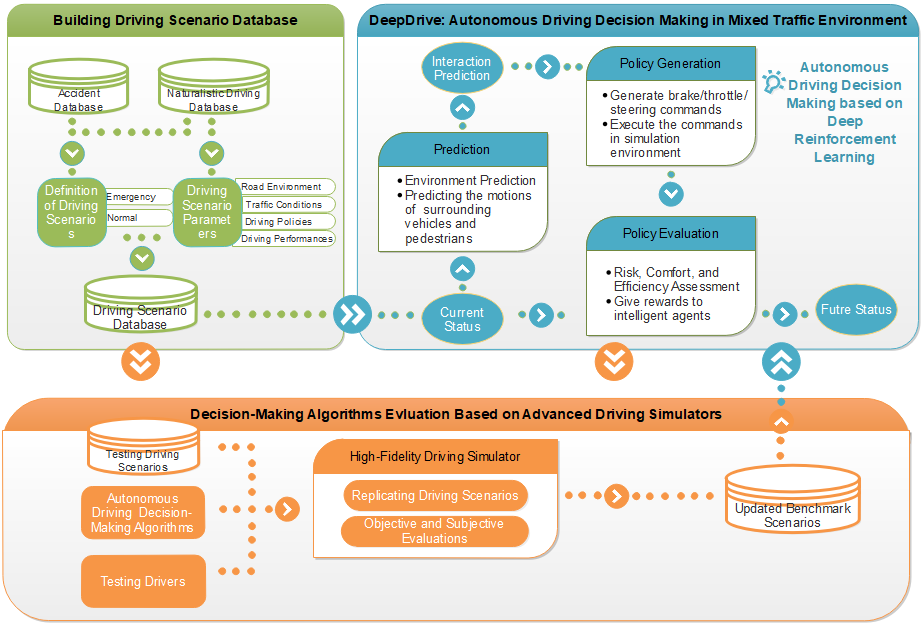 AlphaDrive is a platform equipped with real-world driving scenarios where intelligent agents can learn to drive by trial and error, trials and errors that number in the billions. 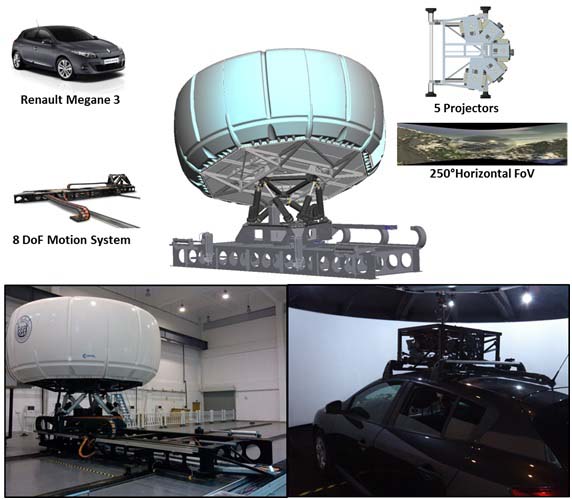 This on-going project is inspired by NVIDIA’s research (1) and MIT 6.S094’s DeepTesla project (2). It aims to learn human drivers’ strategy in steering control. The learned model can map raw pixels from a single front-facing camera directly to steering commands.

This on-going project is inspired by Levine et al. (2012). It aims to imitate human driving patterns. The assumption is that drivers act based on a utility (reward) function, which represents the preference of the driver and elicits the driving behavior. The role of inverse reinforcement learning is to infer or discover the latent utility function from driver (expert) demonstrations and thus generalize the driving policy to unobserved situations. 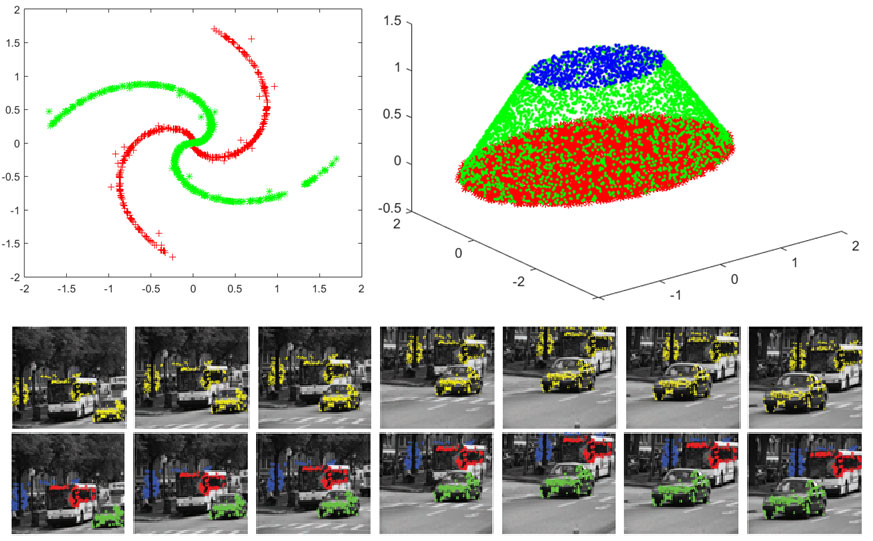 Motion Segmentation Based on Subspace Clustering

This project aimed to extract real-time traffic flow parameters, including volume, density, and intersection delay, etc., based on videos captured by an unmanned aerial vehicle. The featured animation demonstrates the extraction of traffic-flow parameters by setting virtual loop detectors.

This project aimed to model the keep-right-except-to-pass rule using Cellular Automaton. The cellular automaton system is a discrete dynamic system consisting of a regular grid of cells, each in one of a finite number of states. And the state of each cell is updated every single discrete time step according to the updating rules, which are determined by the current state of the cell and the states of its neighbor cells. 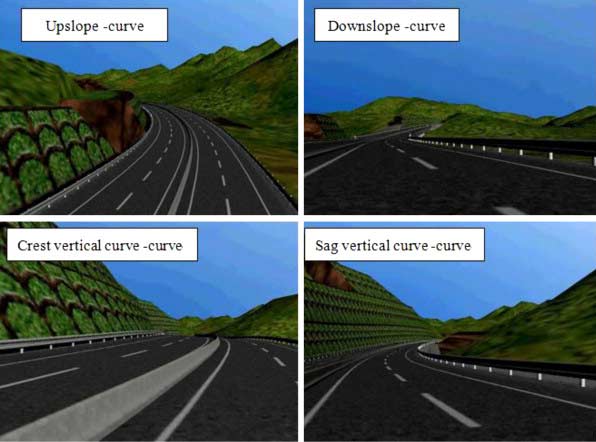 Based on the Shanghai Naturalistic Driving Study data, drivers’ phone-use characteristics and the influence of phone use on driving performance were examined.

The impact of the FCW system on drivers’ car-following behaviors was investigated. (Paper: Impact of a Forward Collision Warning System on Headway and Reaction Time during Car Following)

Traffic Simulation Based on Cellular Automata

To evaluate the performance of the keep-right-except-to-pass rule in traffic systems, the cellular automaton method was applied to simulate traffic flows in one-lane, two-lane and three-lane freeways. The results showed that the model could replicate volume-density relationship well.

Historical driving data are fed into a simulation environment, where an RL agent learns from trying and interaction, with a reward function signaling how much the agent deviates from the empirical data. Results showed that this new model can reproduce human-like car-following behavior with significantly higher accuracy than traditional car-following models, especially regarding speed replicating. (Paper: Human-like Autonomous Car-Following Planning by Deep Reinforcement Learning)

To fulfill the multi-objectives of car following, a reward function reflecting driving safety, efficiency, and comfort was constructed. With this reward function, the RL agent learns to control vehicle speed in a fashion that maximizes cumulative rewards, through trials and errors in the simulation environment. Results showed that the model demonstrated the capability of safe, efficient, and comfortable velocity control. (Paper: Reinforcement Learning based Velocity Control for Autonomous Driving with Multi-Objectives: Safety, Efficiency, and Comfort)

Current autonomous driving decision-making algorithms mainly focus on interactions between passenger cars, while the interactions between large vehicles, non-motor vehicles, and pedestrians are rarely taken into account. However, the mixture of different transport modes is just the critical feature of Chinese urban traffic. Therefore, this on-going research aims to develop and test autonomous driving algorithms for mixed traffic environments. The following steps will be followed: